Oscar thoughtzzzzzzzzzzzzz. But see "Inside Job"!

So, the Oscars last night... boring, am I right?  Anne Hathaway was perky, James Franco was almost certainly wasted, and neither of them were clever or funny.  You want a younger audience, Academy?  Bring the funny.  Yeah I know, by "younger" you don't mean me, anymore.  But still -- the funny.  Bring it.  Because last night was a lengthy dispatch from Planet Meh.

I did enjoy Colin Firth's acceptance speech ("I have a feeling my career's just peaked").  Disappointed that Geoffrey Rush didn't get the Supporting Actor nod -- The King's Speech is as good as everyone says -- but since I didn't see The Fighter, for which Christian Bale won it, it's not really an informed opinion.  I kind of hate boxing, so I'm slow to get to movies about it even when they're great.  I was unimpressed by Melissa Leo's (supporting actress, also for The Fighter) potty mouth -- odd criticism coming from me, as I swear a lot more than strictly necessary myself, but geez, Ms. Leo, have some sense of context, m'kay?


Incidentally I hope Christian Bale's beard is for a role.  It's otherwise unforgivable.  He is no Jeff Bridges.  Behold:

Less incidentally, but I have to put it somewhere, Natalie Portman is all kinds of lovely but I hated her hairstyle.  I wore mine like that in 8th grade -- up on one side, hanging limply down on the other.  It was 1981, and it was terrible then, too, but it was The Thing. For my daughters' sakes, let's not make it the thing again.  Pretty earrings though: 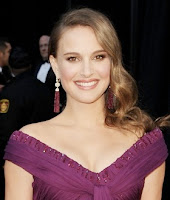 And now The Serious: 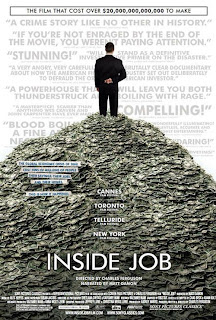 Charles Ferguson, accepting his award for Best Documentary, began, "Forgive me, I must start by pointing out that three years after a horrific financial crisis caused by massive fraud, not a single financial executive has gone to jail, and that's wrong."  His movie is Inside Job, which documents the catastrophic financial collapse of 2008.  You should see it.  Every American, at least, should see it.  It will piss you off, and if you're an Obama fan it will disappoint you (meet the new boss, same as the old boss...) but knowledge is better than ignorance.  Which is not to say I understand it all -- the vocabulary flies around pretty fast, and I wanted to say "wait, explain the part about subprime mortgages/collateralized debt obligations/credit default swaps again?" I saw it in the theater, but will watch it again at home so I can pause it when I get confused.

Yes, haha, that could be a long night... but unlike last night's Oscars, at least it won't be dull.
noted and blogged by sandy shoes at 10:06 AM 3 comments:

Email ThisBlogThis!Share to TwitterShare to FacebookShare to Pinterest
in: movies

Oh wow, cause I would never have thought to use the other side.

So I was shopping in Target the other day (which I think is now OK to do again since they apologized for giving money to homophobes, or something?) and I was browsing the bed and bath section, when a tag on a hand towel caught my eye.  It said "REVERSIBLE!" It was an ordinary hand towel, no printed design, or anything.

Do we need to be specifically told this now, about hand towels?
noted and blogged by sandy shoes at 12:36 AM 2 comments:

Email ThisBlogThis!Share to TwitterShare to FacebookShare to Pinterest
in: bits of fluff between my ears

Right: I am back.

Everything feels better (and thanks for asking, everyone).  Normal is so sweet.

Even when healthy, I get a lot of medical attention in January/February. Annual physical, semi-annual dentist visit, annual eye exam, annual mammogram (DO THIS, LADIES), annual everything seems to fall within the first weeks of the year. Being sick added four (4) more visits to doctors' offices.

I have shelled out a whole lot of copayments lately. It is getting old fast.

The newest medical professional to join my contact list is an otolaryngologist (spell check suggests "paleontologist." Spell check obviously didn't have the month I've had). After all other symptoms had finally subsided, my right ear remained stubbornly clogged. This made me dizzy, headachey, and even more cranky than usual.  The primary care doctor tried a few things and then sent me to the ear-nose-throat guy.

This fellow looked up my nose with a flashlight and didn't say "ew." He looked in my ears, and said my right eardrum looked "dull."  Dull!  And here I thought dermatology was probably the least interesting of the medical specialties.  Evidently a not-shiny eardrum is evidence of fluid behind it and why not check my hearing, just in case.

Turns out I can hear grass grow.  "You have ears like a teenager," said my new favorite specialist.  None of my other parts fit that description any more, so I'll take the compliments where I can.

sandy shoes
I'm a work-at-home parent of two girls, the Bean (12) and the Peanut (10). We live on Cape Cod (hence the sandy shoes). I started this "slice of life" blog soon after my 40th birthday, as part of a tedious, affirmation-seeking midlife crisis. The affirmation-seeking part never panned out but I'm told the tedious aspect is thriving.