Folks, some damn virus is kicking my ass. Again with the sore throat, and now here comes the congestion. I got two discontinuous hours of sleep Saturday night. Last night, four in a row. Progress, I suppose.

I haven't spoken a word aloud since Saturday morning. Throat hurts so much I cringe to think about using it to talk. I'd almost rather drool than swallow, even.

I've been subsisting on apple sauce, chicken soup, and tea. After this is over I will not be drinking green tea for a while. Antioxidants or no, it just doesn't taste that good.

Here's hoping the girls miss out on this one.
noted and blogged by sandy shoes at 5:04 AM 7 comments:

Email ThisBlogThis!Share to TwitterShare to FacebookShare to Pinterest
in: health, things that suck 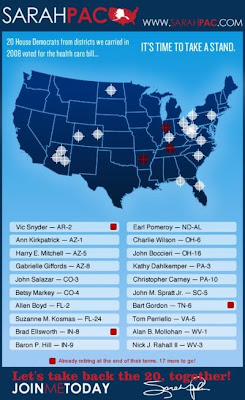 Is it harmless, or is it incendiary?

Gabrielle Giffords said then that this kind of rhetoric has consequences.

Yes, I know the shooter does not appear to have been a Palin fan.

Still. Does the metaphor, cheerfully thrown around by an elected official, contribute to, sanction, encourage a culture of gun violence as problem-solver?

Further - do people really need to be able to carry concealed weapons in this country?

Is it really such a freakin' big deal to wait a few weeks before you're allowed to buy a gun?

A 9 year-old girl was shot today at that Tuscon supermarket, along with the grown-ups. Her name was Christina, and she went to see the Congresswoman's event because she'd just been elected to her school council. She danced, and played baseball. Now she's dead.

A lot is going to be said about the killed and injured grown-ups. Tonight, I'm thinking about Christina and her family.
noted and blogged by sandy shoes at 11:21 PM 1 comment:

Email ThisBlogThis!Share to TwitterShare to FacebookShare to Pinterest
in: current events

I finally updated the "books on my nightstand" section of the right sidebar. Willard Randall Stearne's biography of George Washington, begone! I was so disappointed in it. After reading David McCullough's wonderful John Adams, I thought it would be cool to read biographies of all the Presidents (in order, natch), and somehow chose this one of Washington. That was over five years ago. It was a poor choice. I'm sure it's well and carefully researched, but it was boring. How can that be?! George Washington's life and times! But yeah. The writing bored me so much that it took half a decade to finish the book. So I should be on to Jefferson, next, but I'm reading Ron Chernow's Alexander Hamilton first. It's already promising. Lesson learned: don't buy these weighty books in a hurry. Ask for recommendations, and take longer test-drives at the bookstore.

I read a fair bit while we were out west. There were a lot of garden-variety weekdays with the girls in school, Mr. Sandy at work, and with inclement weather and/or too little time for a drive to the mountains or the coast. Some of those days, I headed to the library to read whatever caught my attention.

One strange rainy morning I read The Bell Jar -- Sylvia Plath's semi-autobiographical novel about a young woman's descent into mental illness, her suicide attempt, and her treatment -- in one sitting. Now I wouldn't say don't do that, exactly, but if you do, be sure you're in a resiliently good mood when you start. Particularly if you are a woman who (ahem) sometimes feels she doesn't quite belong where she is, who ever doubts her self-worth, and who is even somewhat prone to dark moods, or who has ever, ever thought of killing herself.


"To the person in the bell jar, blank and stopped as a dead baby, the world itself is the bad dream.

How did I know that someday — at college, in Europe, somewhere, anywhere — the bell jar, with its stifling distortions, wouldn’t descend again?"

How, indeed. The lure of the novel is its perspective - the reader is on Esther's path with her, and when she tries to kill herself, it seems almost reasonable. Unnerving in 1963, still unnerving today.

Fear not, I also read fluff. Jennifer Weiner's novels are always fun -- quick, witty reads and good stories. I read Best Friends Forever, about a woman whose childhood pal arrives at her doorstep desperate for her help after decades of estrangement. Wacky adventures naturally ensue. It was entertaining, but to my mind, not her best. If you're new to Jennifer Weiner, start at the beginning, with Good in Bed, a very funny novel about a humiliating break-up and Our Heroine's life afterward, or Goodnight Nobody, in which a mother of toddlers doesn't fit in at all with the perfect mommies in her new town, but becomes obsessed with solving the case when one of the perfect mommies is murdered. At some point I will get Weiner's latest, Fly Away Home. It looks to be a bit different from the others, with a more mature protagonist, and possibly without the once-fat-sensible-heroine/skinny-kooky-friend motif that is becoming just a little bit tired with BFF.

There's more, but hey.  That dishwasher's not going to empty itself.

What are you reading?
noted and blogged by sandy shoes at 1:32 PM 2 comments:

Email ThisBlogThis!Share to TwitterShare to FacebookShare to Pinterest
in: books, going West for a bit

Predictably, I have come down with some version of the illness that the girls had during their school vacation.

I know there are a lot worse things to be suffering from than a sore throat, but damn. I have the worst sore throat I can ever remember. It feels like someone's been at it with a cheese grater.

Drinking hot tea, sucking ice chips or throat drops, gargling salt water - none of it is much relief. Ibuprofen is some help, I guess, because when it wears off during the night I wake up crying. Boo-hoo, me.

Been to the doctor, got antibiotics, so I'm hoping this starts to feel better fast. In the meantime I am canceling appointments, skipping meetings, and communicating via notepad and pencil. It is funny how people whisper or pantomime back to me, even though there's no reason for them to.

On the up side, I feel caught up on sleep.
noted and blogged by sandy shoes at 12:18 PM 3 comments:

Email ThisBlogThis!Share to TwitterShare to FacebookShare to Pinterest
in: health, things that suck

Christmas is finally over. It was eventually lovely, and we have some cool new toys to play with. My brother came to visit and that is always a good time. The now-annual Christmas meatloaf (I know, but it's kind of a fancy meatloaf, with sun-dried tomatoes, basil, and provolone cheese, and everyone loves it) was delicious. My cheesecake crust was too thick but nobody complained except me.

May I take a moment for shameless bragging about my daughters? They waited an extra week for our Christmas this year, and even then they didn't wake us up early, and even then they waited patiently to begin opening presents until midday when my parents joined us. They are so good, and I am so appreciative and proud, and I hope they're really listening when I tell them how awesome they are.

I can't remember the last time I got to bed before 2:00 AM. In the two weeks since we got home from the West coast, we've had two major snowstorms and two feverish girls, leaving me two days to do all the gift and food shopping after Mr. Sandyshoes got home. Pre-holiday stress brought to you by the number two. Then we had one Christmas celebration, and, just as I thought I could sleep the sleep of the righteous: one 3:00 AM emergency room visit that same night. It was nothing too awful, and all is now well, just very bad timing for a simple thing to need checking out. This left us one day to recover, and tomorrow: back to school.

I will be busy with a ton of stuff. There are piles of laundry to do, books to shelve, wrapping paper to put away, boxes to flatten, outgrown clothes and toys to donate, papers to file. There are thank-yous to be written and phone calls to be made. There is the 2011 dump (does anyone call it the "transfer station," really?) sticker to be bought and the recycling to be brought there. The calendar is beginning to fill with appointments and meetings and the running "TO DO" list needs updating. I do love an updated TO DO list.

At some point I plan to make a big cup of tea, head down to Sandy Neck, breathe deeply, and watch the waves roll in. Have I mentioned it is good to be home?

Happy New Year, all.
noted and blogged by sandy shoes at 11:41 PM No comments:

sandy shoes
I'm a work-at-home parent of two girls, the Bean (12) and the Peanut (10). We live on Cape Cod (hence the sandy shoes). I started this "slice of life" blog soon after my 40th birthday, as part of a tedious, affirmation-seeking midlife crisis. The affirmation-seeking part never panned out but I'm told the tedious aspect is thriving.